I described our support for Tides in SBP (Sub-Bottom Profiler) data in a previous article (CTI Times #6).  In this new article, I will elaborate on how SonarWiz uses this and the other vertical offset information to correct the sonar image.

The Topographic Correction in SonarWiz for SBP (Sub-Bottom Profiler) data straightens out the along track path of the sonar so that it is flat.   The resulting image shows the seafloor as it is in the real world.

In the illustration of an uncorrected image below, the bottom should be a continuous slope.  It is not due to variations in the sonar’s vertical position. 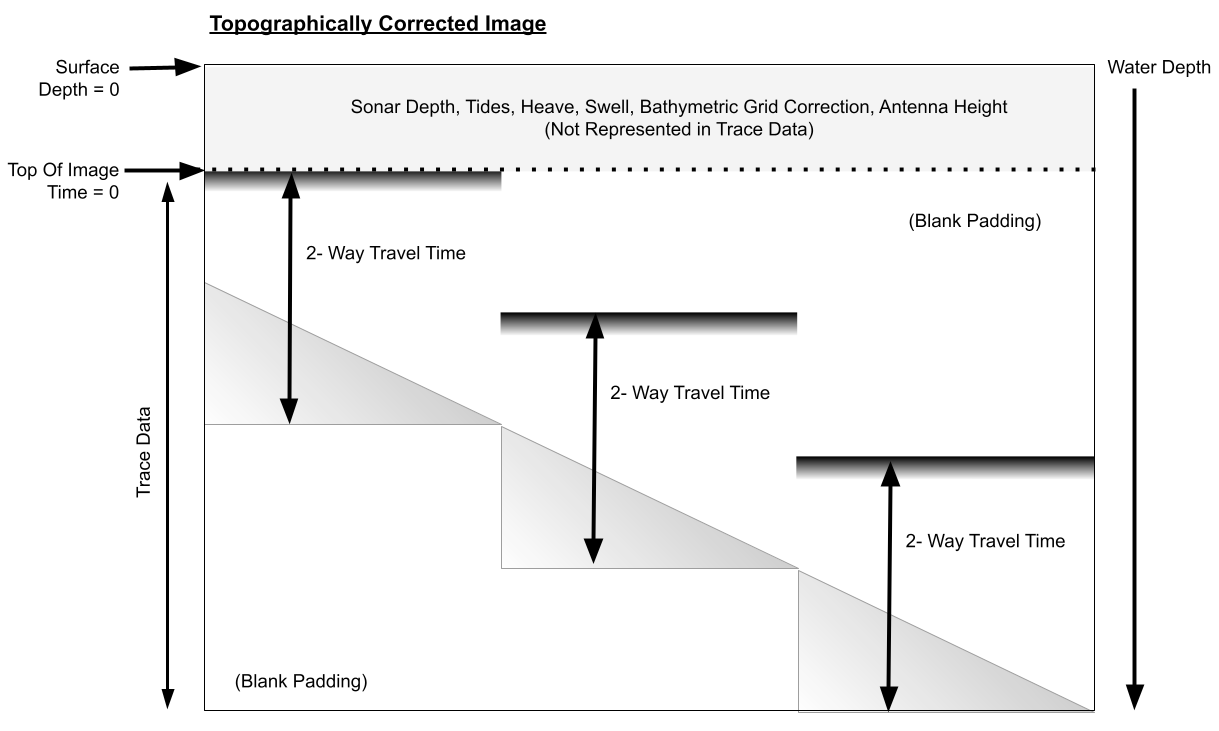 SonarWiz corrects the image by padding the Trace Data using the following vertical offset information:   Sonar Depth, Tide Offset, Bathymetric Grid Separation, Heave, Swell (similar to Heave, but calculated in SonarWiz),  and Antenna Height.  The padding is added above and below the Trace Data in order to span the full depth of the corrected image.  There can be an area above the image that does not hold any useful information.  This area is not included in the Trace Data.  This is shown in the illustration as a gray colored area.  In other words, SonarWiz breaks the water column down into 2 parts:  depth above the image (not represented in the trace data) and depth below the image (trace data).

Note that the ring down or main bang of the sonar is shown in the illustrations in order to better illustrate the top of the original data.  SonarWiz has a feature that can be used to blank this undesirable image data and other data in the water column.  This will result in a clean water column.  Only the data below the first bottom return will be visible.

The topographic correction of SBP data is useful for showing the sub-bottom echos vertically as they exist in the real world.  This not only makes analysis and digitization easier, it is also used in some of the exports that SonarWiz uses. The exports include bitmap images and SEGY files for use in other programs.